Enon's history is built on a strong foundation of people who love the Lord our God.

On May 13, 1848 eight pioneers met in the home of the Long family to conduct services anticipating planting a Baptist church. At that time, Upshur was a very young county with settlement having intensified following the decline of the Caddo and Cherokee Indians, and the advent of Texas statehood.

The church met in homes for a period of time, possibly having constructed a small cabin in its early years. The members met Saturday evening for worship and Sunday mornings for business. The church records declare worship began "...at early candle-lighting time."  In these services "a collection was lifted" for the expenses of the church. When the Civil War began, the church clerk had to be replaced during his military service. Beginning with the 1850s families, whose names are still prominent in the church and community today, began to arrive from such distant states as Alabama and Georgia.

The first church building was a tall, imposing wooden structure with a bell which was rung on auspicious occasions, as well as to announce deaths in the community. During services, babies slept on home-sewn quilts, while such revered and respected pastors as Bro. W.R. Arrington and Bro. McNair powerfully delivered the World of God.

On a tragic night in 1934, during the depression years, the comunity awoke to discover the church building on fire. Bro. Travis McPeek vividly recalls, "In the embers glow, they organized to build another church building." With unwavering faith and perseverance, these men and women turned their loss into victory by acquiring and dismantling a school building in another part of the county, transporting it to Enon, and rebuilding it. Those who have come behind them have not only found them faithful, but have chosen to exercise the same faith. True to their heritage, the children and grandchildren of those faithful warriors, along with many other families who joined them in the ensuing decades would, once again, rise to the occasion to erect new facilities when the need arose in 1983. The current sanctuary was built almost entirely by church members. 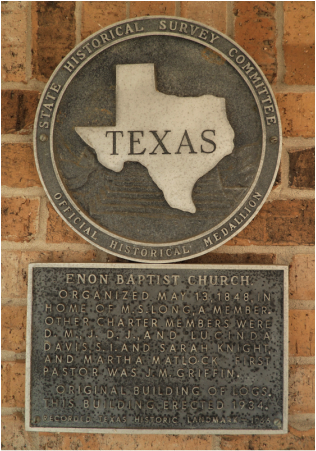